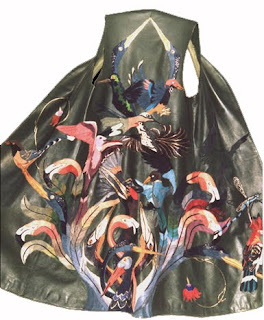 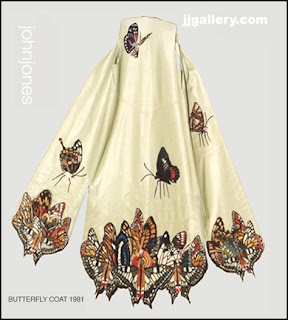 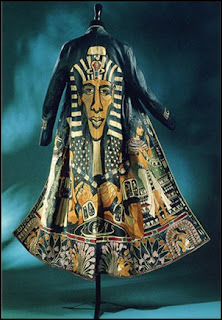 This is my favorite new discovery!!!

John Jones is a textile artist specialising in wearable art, which he has called ‘walking picture coats’, and expressive interiors. John’s picture coats are often made to commission to tell a story of the owner and he has many interesting tales to tell from over 40 years working in the fabulous world of textiles.

His famed walking picture coats are a fantastic combination of artwork and fashion, which he describes as “pictures with sleeves that you can take off the wall onto the streets”. Leather is the predominant material used in John’s work as “it doesn’t fray at the edges so you get a much cleaner line when creating your images and you can stitch extra fine detail very near the edge. I wanted to create pictures you could take out onto the streets, not precious images safeguarded behind glass or cordoned off. Leather’s durability had an immense appeal.”

His first picture coat was designed in 1969 and inspired by Tolkein’s Lord of the Rings. John explains, “The coat tells the story of the fight of good against evil. The figures you can see are Gandalf on the white horse shadowfax, a tree Ent with one of the dark riders hiding behind and a hobbit confronting Smaug the dragon with ancient runes on the border.” He then went on to design several more picture coats featuring birds, butterflies, sea horses and other famous and mythical creatures.

A particular favourite of John’s was a coat he made in 1977 featuring a Punch and Judy design, “which passed through my hands so quickly I had no time to get it photographed.” He then turned the design into a wall panel for himself as he liked the image, but this too was sold some years later to a writer’s agent in London. He has also worked on several other interesting commissions, including a fabulous peacock coat “commissioned to replace a jealous peacock called Clarence when its owner was married.”

So how does John approach these fascinating works of art? “I look purely at the image or story first, they are not fashion they are beautiful ‘things’. I do have in mind what they will look like when they are worn – all the coats have been bought or commissioned by people who wore them.”

The uniqueness of John’s picture coats has led him to have one of his pieces – a picture coat based on the Egyptian Pharaoh Akhnaton and inspired by an exhibition of Ancient Egyptian Art at the British Museum in 1972 – catalogued by The V&A museum, an honour which he is understandably thrilled about. John says, “Naturally, as a self taught artist, I am pleased to have the endorsement of The V&A for my work. It is now in the permanent V&A Textile Collection and some people have told me that they saw it on display some years ago when it was first taken to the collection.”

This success was tinged with some sadness for John, who missed the coat that had been his own for many years. He explains, “I wore Akhnaton myself as my everyday coat for 13 years. I miss not having it around as it has immense energy.” So he decided to replace Akhnaton in his life with a ‘sister’ coat, Nefertiti, based on the Egyptian Pharaoh’s wife. “The notion of a feminine side had been on my mind for some time. The figures in the coats represent people in my life. Over the years my family life has changed so the ‘sister’ coat includes those changes. They are story coats…they are made when a story needs to be told.”

John’s fabulous interiors work is as striking as his picture coats, reflected by a series of high profile commissions. One such commission was for some 3D patchwork leather wall hangings for the new Hilton Diaganol Mar hotel in Barcelona. For this he created two separate panel designs – a water panel and a mosaic panel. “The water panels are the reflections of the Barcelona shoreline, they are what you see as you fly in on arrival, and the mosaic patterns are my homage to Gaudi” he explains, referring to Antoni Gaudi, a man who greatly influenced architecture in Barcelona and whose work can be seen across the city.

John added a third panel later featuring the streets of Barcelona, “taking in all the flavours of the city”. This panel uses the art of 3D work to its full effect, using mosaic tiles as the buildings allowing you to really feel like you are walking the streets of the fabulous Spanish city. John has produced an extraordinary YouTube video to demonstrate the though process behind the creation of the panels, and it is well worth spending the three minutes watching the video to get inside the mind of a remarkable designer at work. The video can be seen here.

This technique of using animation alongside his designs is a relatively new feature, introduced by John to help people really understand the ideas behind his designs. John explains, “Animation is an exciting medium, with the added dimension of time the virtual animations help to articulate the inspiration for a stitched piece.” Some of John’s animations can be seen on his YouTube channel here and more information can also be found at www.jjgallery.com
Posted by loveroffashion at 7:16 AM

really cute, and the whole photo-shoot is awesome! Great blog dear, congrats! Would you like to visit mine, and why not follow each-other? Let me know:
wedding makeup artists sydney