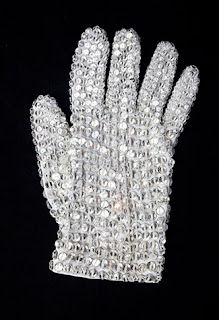 
Nearly 30 years ago, I was a fortunate eyewitness to a pivotal Michael Jackson epiphany: the true glove story.

As the resident music-head at a Hollywood film production company, I was tapped to design a music video for Michael Jackson and his brothers in 1980. Michael was already a big star – his breakout solo album "Off the Wall" was still riding high on the charts. The Jacksons had re-formed, and it was a long time since the group had garnered a hit. The designated single from their new album was "Can You Feel It," a song with an insistent, "Bolero"-like rhythm.

(Michael was very high on the song and had attempted to leave the six-minute, unedited version on my phone machine a few days before, but it cut off after 30 seconds.)

After a brainstorming session and a riveting a cappella performance of the song by Michael at the kickoff meeting (featuring some gravity-defying dance moves that, alas, predated moon-walking), I was asked to take Michael on a tour of the production facilities at the company, Robert Abel & Associates.

As we walked through the facility's maze of hallways, camera rooms, and special-effects labs, we encountered the chief film editor, Rick Ross, who was cutting and splicing a TV commercial. Rick was wearing a short white cotton glove on his left hand as he ran the film through his fingers, looking for the yellow grease-pencil marks he had made on various frames of film to be edited. To have a little green box of these disposable gloves sitting on the editing bench was standard practice for film editors in those days.

Michael, who hadn't shown any particular enthusiasm for the tour so far, seemed suddenly transfixed by the glove and politely asked a number of questions about it, concluding with, "Could you spare one?" But of course.

The rest, they say, is HIStory.

The single white glove (later covered in silver sequins) made its television debut on Michael's left hand during his stunning performance of "Billy Jean" at Motown's 25th anniversary TV special in 1983. It became the King of Pop's wardrobe icon for the rest of his career, worn by Jackson and his multimillions of adoring fans the world over.

A number of mysteries still surround Michael Jackson's strange life, and some questions may never be answered.

I'm just glad I could shed some light on one of them.

• John Kehe is the Monitor's design director.
Posted by loveroffashion at 12:01 AM