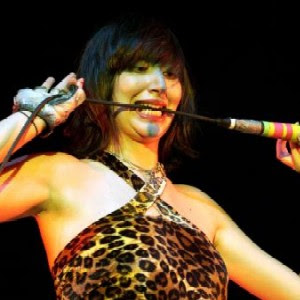 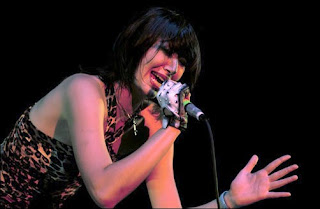 One of my fave style icons is Karen O of the YYY's. The bitch just has style! Back in my NYC days of being in a rock band (tales for another time) I rehearsed at a studio space called Funkadelic aka Junkadelic. It was nicknamed the latter because it was a total hole, not to mention a junkie hangout. (Sorry mom and dad, it was the cheapest place we could get.) I was shocked to find out that the YYY's were rehearsing there for their "It's Blitz" tour. Nice to know that big budget bands don't always blow their budget on killer studios!

After one such rehearsal, Karen left her amazing leopard print leotard behind. It just so happened that I was friends with the owner of the studio and after my rehearsal he called me in to show it to me! Knowing that I was a HUGE fan, and that I am a fanatical crazy clothing collector, he told me that if she didn't come back for it, he would give it to me!

Bummer for me it was her favorite stage piece and her manager came back for it BOO :(
Posted by loveroffashion at 7:47 AM

That's a great story! Too bad you didn't end up with the leotard :)

I've been taken with Karen O since I saw her play a free show in Boston 5 years ago. At the end of the show she ripped her unitard off and spit bottles of water into the crowd. Amazing haha.

Hey Wait! I think I was at that show too? I saw them when I was living in Boston several times.

It was an outdoor show in fanueil hall/government center area I believe, in I want to say August 2006. So I guess it was more like 4 years ago hah.

I would love to see them perform again though, for sure!