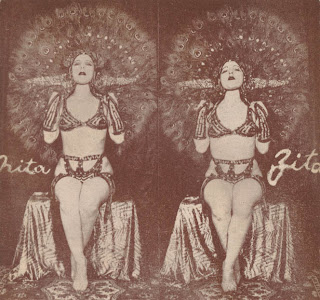 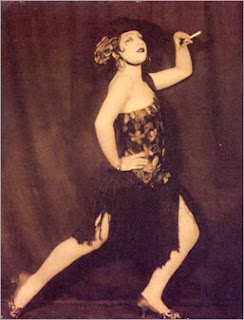 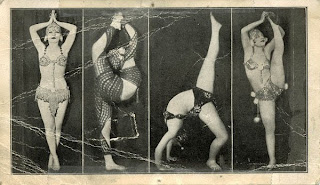 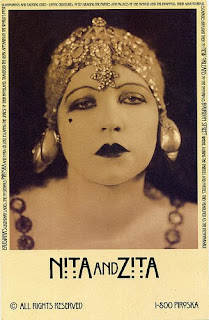 I love vintage costumes! I became a collector when I was in high school finding amazing show pieces that were discarded at thrift stores and junk shops. I found the most amazing vintage 1920s ice skating costume at the Manhattan Vintage Show years ago, it is one of those things that I may never wear but will stare at in my archive collection for inspiration. Last night my good friend and fellow vintage dealer Kim stopped by my house to show me her amazing 1920's Rockettes Costume!! It was the most beautifully constructed piece of clothing I have ever seen. So beautiful in fact, it inspired me to write this post!! ( by the way, Kim's vintage collection Rocks check out some of her wares here here)

Whenever I get the time I do a lot of research on costumes and dancers.
One such pair of dancers that I found on a fluke while researching online are Nita and Zita...here is their story.


"Flora and Piroska immigrated to the U.S. from the Jewish shtetl of Nagybanya, Hungary, in 1922 to pursue their career as "international dancers," performing under the names Nita and Zita. Photos indicate that their act combined burlesque and acrobatics. Together, they performed all over the United States, and, as far as we can tell, Shanghai, Panama, and perhaps Paris and Egypt. The sisters were known for carrying their elaborate, handmade clothes and costumes with them in two steamer trunks.

In the late 1940's, the sisters settled in New Orleans and became quite reclusive. Their home became their refuge. They painted their entire house -- inside and out -- in brightly colored sponge patterns, and painted most of their furniture with intricate spider web figures. On the rare occasions that they did leave the house, they dressed in fine handmade clothes of their own design.

Flora and Piroska died in 1985 and 1991 respectively. They are buried in the pauper's section of Hebrew's Rest Cemetery in New Orleans. The only people present at Piroska's funeral were a Rabbi and Betty Kirkland, the sisters' next door neighbor. Upon gaining permission from their only living relative to sell the sisters' belongings, Ms. Kirkland opened their home to what became a five-year garage sale. The house was literally packed with thousands of pieces of handmade clothing, hundreds of photos of Nita and Zita performing, handmade bead curtains, handmade placards advertising Nita and Zita performances, and more. Curious locals, vendors of vintage clothing and -- eventually -- collectors of outsider art snapped up Nita and Zita's clothes, furniture, photos and collectibles until Ms. Kirkland closed up shop in 1996. This sparked a veritable New Orleans underground "war," as several vintage clothing store vendors and Ms. Kirkland clashed over who was the authentic protector of Nita and Zita's image and memory.

From what we have gathered, Nita and Zita would shop at thrift stores, looking for clothing made out of the highest quality fabric possible. They would alter the clothes for fit, as well as to match their personal style. Many of their dresses featured long sleeves that tapered down to a point at the knuckles of the hand. Much of the clothing featured prominent stitching wit thick, dark yarn. Our costume designer, Olivia Wildz, used actual Nita and Zita costumes as a starting point and inspiration for her original designs for the show.
Posted by loveroffashion at 9:09 AM

Hi...
I am glad that you found
NITA and ZITA..
Although, as is to be expected, the piece that you posted,
is fraught with inaccuracies..
but the basics are there...

As alluded to, I am one of those
who considers themselves the defender of the reputation of
NITA and ZITA..

Two of the images were used without my permission in the original article...

I am the author of the legend around the edge of the
ART CARDS and the much larger poster sized piece...
which I sell to help defray the costs on the ongoing research....

NITA and ZITA rose above the treachery that was heaped upon
them and proved to be the
ULTIMATE SURVIVORS...

Those of us that have their PICTURES and possessions around us know that we are "looked after and protected" by the GIRLS...

Do feel free to get in touch with me in NEW ORLEANS at
NitaZitaNoLa@aol.com

great post!! i just learned about these amazing women. what inspiration lives they lead.