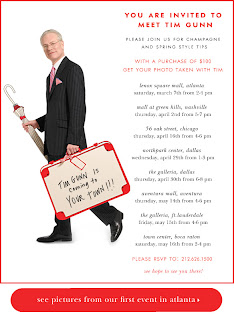 according to Wikipedia Tim Gunn is a
fashion consultant and television personality. He was chair of fashion design at Parsons The New School for Design from August 2000 to March 2007 when he joined Liz Claiborne as its chief creative officer. He is well-known as on-air mentor to designers on the Bravo reality television program Project Runway. Gunn's popularity on Project Runway led to his spin-off show, Bravo's Tim Gunn's Guide to Style, as well as his book A Guide to Quality, Taste and Style.
Posted by loveroffashion at 10:42 AM