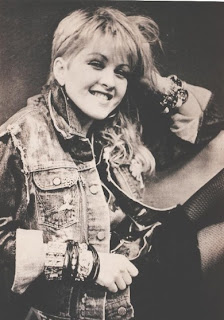 While working for Betsey Johnson in NYC I had the great pleasure of working with/dressing some of the most amazing people. One of my most notable clients was Cyndi Lauper! I dressed her for several appearances, before she took on a full time stylist. There is no denying, this woman knows what she wants. From the moment she walked into the door, I would have to take a deep breath just to prepare myself for her energy. It was a great energy! She is very precise with pattern and color and what registers on film and what does not, it was truly inspiring. My favorite memory of her, was dressing her for a television appearance the year she released her "Bring ya to the Brink" album. I was showing her a pair of espadrilles to wear with this amazing red dress (which I own ;) she asked me if I thought the shoes would look good with bakelite jewelry? She proceeded to tell me that she had a collection of Bakelite jewelry explaining each piece! I then had to ask the burning question. Do you still have all of your Stage Wear from the 80s? She replied with an enthusiastic "YES" apparently she has an entire archive of all of her clothes. Thus began my obsession with archiving my vintage and designer pieces.

Another great memory was dressing her for yet another televised appearance. A young lady was in the fitting room trying on dresses for prom. The young girl came out in a fantastic cupcake style, then immediately tried on a simple pencil cut. Cyndi was very proactive in giving her advice the whole time she was trying on these dresses. She insisted that the young lady get the cupcake dress because it was more special after all, it was her prom. The young lady politely smiled and brushed her off. Cyndi looked at me, and laughingly said, I don't, do you think? she knows who I...NAH. We both had a giggle. Needless to say the girl bought the boring dress over the cupcake. Clearly not a lady of the 80s...because if Cyndi was helping me pick out my prom dress, You better believe I would buy the one she told me to. :)
Posted by loveroffashion at 9:38 AM

she is the sweetest woman you'll ever meet!!