One of the designers I found in my couture pattern dig. I love! 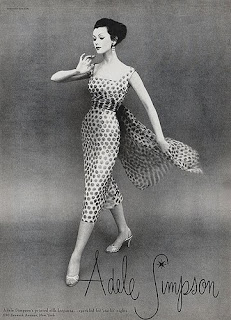 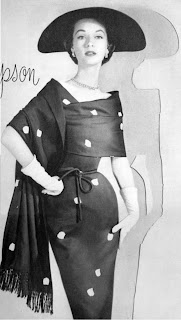 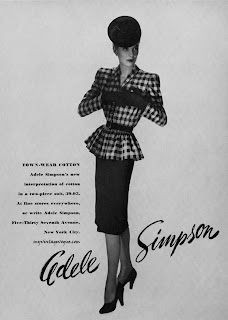 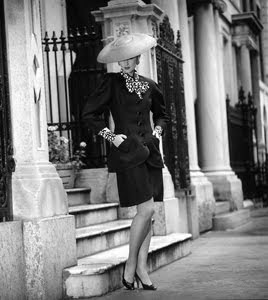 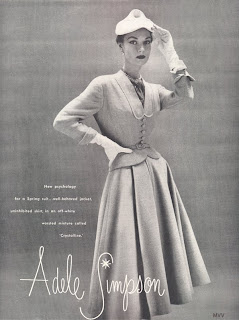 Born: Adele Smithline, in New York City, 28 December 1904.
Education: Studied dressmaking at Pratt Institute of Design, Brooklyn, New York, 1921-22. children: Jeffrey, Joan.
Career: Assistant designer, 1922, then head dress designer, 1923-26, Ben Gershel's ready-to-wear fashion house, New York; chief designer, William Bass, New York, 1927-28; designer of Adele Simpson fashions, at Mary Lee Fashions, New York, 1929-49; president and director of Adele Simpson Inc. (bought out Mary Lee Fashions), New York, beginning in 1949. Member of the New York Couture Group; treasurer and board member, Fashion Group, New York; co-founder and board member, Fashion Designers of America.
Collections: Brooklyn Museum, New York; Metropolitan Museum of Art, New York; Dallas Public Library, Texas.
Awards: Neiman-Marcus award, 1946; Coty American Fashion Critics Winnie award, New York, 1947.
Died: 23 August 1995, in Greenwich, Connecticut.
The longevity of Adele Simpson's fashion business might be attributed to her acute awareness of the needs of her clientele: busy women who were frequently in the public eye, traveled quite a bit, and who required practical, well-made clothes to please not only their husbands and their observers, but themselves. Avant-garde or bizarre fashions would not do for these women. Simpson consistently offered conservative, yet pretty and feminine versions of current trends. The garments were made of ordinary fabrics such as cotton—Simpson was the first American designer to treat cotton seriously as a fashion fabric—or sumptuous fabrics inspired by the textiles she saw and collected on her frequent world travels. Her inspiration might have come from close to home as well, as in her adaptation of a New York City public school ch ild's drawing of a cityscape at dusk, which Simpson interpreted in a silk dress and jacket ensemble that was later displayed at the Fashion Institute of Technology.

From the beginning of her career, Simpson dedicated herself to what she described as "realistic" fashion. During a time when women's dresses were developing a radically simpler silhouette, Simpson went even further and devised clothing that could be stepped into rather than pulled over the head. She concentrated on creating dresses and coats, blouses and suits, or dress and jacket combinations, all of which could coordinate and allow the wearer to be well dressed from daytime into the evening with a minimum of effort. An ingenious design consisted of a woolen cape and skirt teamed with a luxurious brocade blouse, and a separate underskirt made of the brocaded blouse material. When the cape and outerskirt were removed for evening, the resulting costume would be an elegant two-piece dinner dress. Political wives with busy itineraries and traveling schedules (including four First Ladies), and international performers such as Dame Margot Fonteyn, appreciated the practicality of Simpson's clothes, as well as their quality and artistic merits. As if to compensate for the basic conservatism of the styles, Simpson often rendered them in unusual, often sensuous fabrics.

Credited with "taking cotton out of the kitchen" during the 1940s, Simpson proved the fiber's suitability for street dresses and full-skirted evening gowns. Although known for her pretty prints in delicate colors, Simpson often used black for spring or summer, and made unusual pairings of fabrics, such as velvet over gingham. Silhouettes would generally be modified versions of prevailing shapes. There would usually be a defined waist and gentle overall curvaceousness that proved flattering to her somewhat more mature customers. Even the Simpson version of the chemise in the 1950s came with an adjustable tie belt.

Simpson often looked to the East for exotic touches to her designs. In the early 1960s, one collection featured day and evening clothes for summer that were made of linen and silk embroidered with Turkish patterns or printed in Byzantine mosaic motifs. Simpson also employed authentic Indian cotton sari fabrics, some embroidered in gold, for a dress collection that was exhibited at the New York World's Fair. Japanese silk prints also proved to be elegant and feminine sources of inspiration.

Drawing from the collection of foreign costumes she amassed during world travels, Simpson might conceive a fabric design from a single decoration, color scheme, or detail to create fashion that she would then display next to the original native piece. A printed evening gown might be inspired by a delicately embroidered Chinese jacket, or a vested outfit by a South American gaucho costume. Clothes such as these would appeal to clients who traveled, or merely wished to enliven their wardrobes with a touch of the exotic.

Adele Simpson, Inc. had long been one of the most successful manufacturers of women's better ready-to-wear. Prices of the designs ranged from about $100 in the 1940s, through $200 for a dress or suit in the 1960s, and from $400 to $1,000 in the 1980s, although a simple "ladylike dinner dress" could be had for $325. In 1990 Gump's catalogue (San Francisco, California) offered two versions of Simpson's "little black dresses" for around $400 each. First Ladies Mrs. Eisenhower, Mrs. Johnson, Mrs. Nixon, and Mrs. Carter included Simpson designs in their public and private wardrobes. When Mrs. Johnson selected a Simpson sand-beige coat and black silk dress ensemble to wear on Easter Sunday, the item made the news. Mrs. Nixon wore Simpson designs to Russia, China, and Africa, and one of the second Inaugural balls.

While for years the designer favored only pure silk, wool, and cotton in their many variations, she later did admit the merits of synthetic fibers. Simpson always made a point of asking women about their needs and desires in clothing; she credited her belief in Christian Science for setting the standard for beauty and excellence in her work.

After Adele Simpson donated her vast collection of artifacts, costumes, and fashion magazines to the Fashion Institute of Technology in 1978, she continued to oversee the designing, but Donald Hobson became the official designer for the company. His work maintained the Simpson aesthetic, but it evolved into even softer, more fluid and youthful lines.

In August 1995, Adele Simpson died at her home in Greenwich, Connecticut.

Publications
Posted by loveroffashion at 9:26 AM