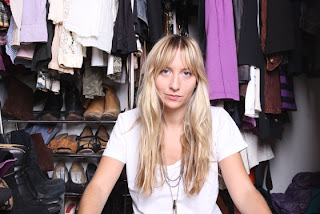 If you could describe the woman who you want to wear your clothes, what would she be like?
There are pieces that are basic enough for my parents to wear and others that are more young and edgy. We're the cheapest thing at the most expensive stores — which I love. I love that you can go to Opening Ceremony and find something that's $60.

Jen Brill in Sophomore's fall 2008 look book.Photo: Cass Bird
Where do you get your inspiration?
Lately I have been watching lots of rare films from the seventies. I just watched a documentary about washed-up groupies that follow around the Grateful Dead and Led Zeppelin. They were actually naked in a lot of it. But it's interesting to see what the silhouettes were when they were wearing clothes. And then there's this great movie called Little Darlings, one of Matt Dillon's first movies, and it has really cute T-shirts and sweatshirts and jackets, which is more of our Sophomore style.

What's the first designer item you ever bought?
Betsey Johnson! Going to her store on 60th Street was very exciting as a teenager. She had this period in the nineties that was a lot of black sheer tops. A lot of people were buying her flowery stuff, but I was more into her more gothic seventies-looking stuff.

What trends do you personally like for fall?
Dark colors and dark metal, tights with long T-shirts, oversize blazers, beat-up penny loafers, and zipper skirts.

Are there any trends you wish would go away?
American Apparel. Is it just me or are the clothes starting to look like Halloween costumes?

Who are your favorite designers?
Isabel Marant for great basics, more fancy T-shirts. She has a T-shirt that I wear all the time — it was $200 and made of linen. Balenciaga I find to be really exciting, it always hits me. And Proenza Schouler feels like it's on the mark every season. I love Opening Ceremony's shoes and Margiela's bags and shoes.

Where do you shop in the city?
Opening Ceremony, No. 6, Curve, and I Heart.

What’s one thing you really want to buy right now?
I really want the Balmain fringe boots! But, they're too expensive — over $1,000.

What's the one thing you can't live without?
A good pair of jeans. I have a pair of Levi's that I've had since high school. I think they're a 517. I love that silhouette. Not too high-waisted, only a little past a bellybutton, tight, and a little bit wider than a straight leg. It's one of those things that whether in or out of style, I'll always wear them.


I have a couple things in commom with this gal, we both love Betsey! and she is sick of American Apparel too!!
Posted by loveroffashion at 10:36 AM