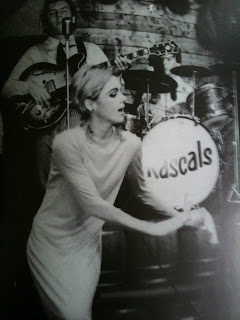 I recently came across a photo of Warhol "It Girl" Edie Sedgwick dancing to my father's band "The Rascals" in 1965. At the beginning of my dad's career, they had a residency at a venue on Long Island called the barge, that was literally a barge. Edie was invited to dance for the band for a piece in Life magazine focusing on her life and fascinating existence.
The shot was taken by Warhol pal photographer Fred Eberstadt.

I found it very exciting and coincidental that the Frist Center is hosting an exhibit, this summer, called "Music and Dancing in Andy Warhol's Work" SO EXCITED!!!

Here is the scoop!

Over the course of his meteoric career, Andy Warhol (1928–1987) used the medium of music to transform himself from fan to record album designer, producer, celebrity night-clubber and rock impresario. Warhol Live presents a comprehensive exploration of the artist’s work as experienced through the lens of music and dance. This exhibition juxtaposes major pieces (Elvis, Marilyn, Liza Minnelli, Grace Jones, Mick Jagger, Debbie Harry, the Self-portraits and the Campbell's Soup Cans) with lesser-known works inspired by music and the performing arts (album covers, illustrations, photos and Polaroids), along with films and sound recordings, which provide a visual and aural score to Warhol’s extraordinary work and life. The exhibition includes nearly 300 works, including objects and documents from the artist’s personal archives.

Warhol Live: Music and Dance in Andy Warhol’s Work is produced by the Montreal Museum of Fine Arts in partnership with The Andy Warhol Museum, one of the four Carnegie Museums of Pittsburgh.

for more info visit www.fristcenter.org
Posted by loveroffashion at 7:03 AM