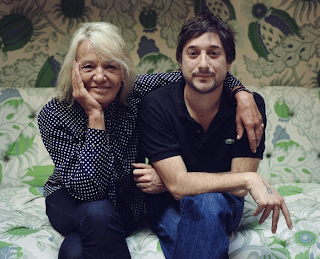 
I met Anita almost a decade ago. I was in London and I was with this girl who'd gotten mugged. I was running after the guy who stole her purse. I didn't know the neighborhood, and he got away. Then I lost the girl, too, 'cause I'd been running for so long. I didn't know where I was. I stopped to smoke a cigarette, but I didn't have a light and then I saw a lady who was dressed very chic. She was gardening and smoking. She had a beautiful scarf, and she was down there with a trowel, and this cigarette hanging out. I walked up to her and said, "Excuse me". She turned around and it was Anita Pallenberg! But, before I recognized her, I knew there was something special about this lady. We ended up talking and exchanged phone numbers. I knew Anita's son, Marlon, from New York. Marlon is very discreet, but I knew he had pretty heavy-duty parents [his father is Keith Richards]. And on my first trip to London, people had said I should meet Anita. What's so strange is that we met in this accidental way.

Anita is the queen of rock'n'roll, like the female Chuck Berry. I thought it would be great to put her in a film. I like to start out as friends and turn it into work, rather than the other way around. It's nice for me to have a relationship that pre-dates the filming. Then, when you start working, you're already connected. If you look at the credits of my movies – my brother, my father, my wife and a lot of my friends are there. There's a greater trust and those people tend to give that much more. Anita is like part of my family. She and Rachel, my wife, sometimes knit together.

She lives by her own rules. Sometimes I'll just sit back and watch her. Anita is very punk-rock. When I went to her house for the first time, she was blaring Beethoven on one speaker and the Wailers on the other. And I was like, "What the fuck is this music? I've never heard such a combo!" She was playing both because she couldn't decide which to put on.

Recently Rachel and I went over to her house and Anita showed us some of her Super 8 home movies, with Keith and the Stones from the late Sixties. That was amazing. To her, it was just home movies, but to me and my wife, it was: "Wow!" Anita is very glamorous.

Anita Pallenberg, 64, is the original rock chick. Girlfriend of Brian Jones, alleged crush of Mick Jagger and common-law wife of Keith Richards (by whom she has two children), Pallenberg was the inspiration for Wild Horses, and acted in Performance (1970) and Barbarella (1968). In Mister Lonely, she plays a Queen of England impersonator. She lives in west London.

I'd heard about Harmony before I met him. I'd heard he was a child wonder, a genius. My son is very trendy and with-it and he was the one who showed me Gummo. Then, one day, I was gardening at the home of a friend of mine in Fulham and who passes by but Harmony. He said something like "You got a light?" and we got talking. I recognised him. But he looked different then, he had long hair. He was in London filming a documentary about David Blaine's glass-box stunt. And so I went down there a couple of times and saw him. Then I did an interview with him and Bay Garnett for Cheap Date magazine. We talked about free speech and the way his mind worked. By then we'd already started talking about film. I said I wanted to be in one of his movies. And then I kind of persecuted him until I got a role! Every time I saw him, I said "I'm going to be in your next movie!" Just to psych him out.

At first, I wanted to play the Mother Superior character in Mister Lonely. We talked about that for a bit. But then when I saw him again he said I should play the Queen of England character. I've never spoken the Queen's English, I would never go for a cup of tea at the palace, I'd never accept an MBE. I'm completely anti-establishment; the only thing I like about the Queen are her scarves and her jewels. But he said, "Just look at the script, there's a speech for her that is very close to my heart". I read it and she has a very poetic speech where she sums up the spirit of the commune, and I was quite moved.

We were filming in Scotland and I lived in a B&B in a village with Lincoln – or, the guy who played the Abraham Lincoln impersonator. We rented a car at the weekends and drove around Skye trying to eat out, but all the restaurants were quite hostile. Harmony says I was too intense for those people. The smoking ban didn't help, but we got quite close.

Harmony's very mellow to work with, so funny and peaceful. We see each other a few times a year but stay in touch by phone and email. We both try to not be compulsive any more. That's something else we share, and we're both trying to be more balanced these days.
Posted by loveroffashion at 11:00 AM