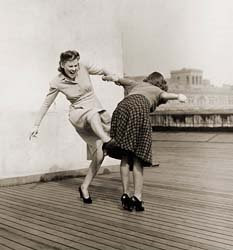 Why can't shopping be considered a sport? Seriously, if it were, I would be the Michael Phelps of shopping NO DOUBT. I am a champion shopper and I will never back down. Sometimes I feel a little crazy, especially when I am in a thrift store and I see a bitch with something that I missed in her hand. I curse her under my breath and imagine myself gauging her eyes out with spoons. Dark, I know...
Living in New York helped me a lot in my training for competitive shopping, women up there WILL hurt you, if you don't back off their goods. I once had a lady stalk me because I had all the good stuff in my hands. She literally followed me through the entire store giving me the evil eye. I was very afraid for my life.

This past week was the Barney's Warehouse sale, it is pretty awesome and kind of a joke at the same time. Because a dress that was once $3,000 is now only $900 gee aint that penny pinchin! It has been said that many a gal gets thrown out of the store because she just can't keep it together. In other words, the cats start fighting. Kind of like lionesses in the jungle.

So, I will stick with my Goodwills, Southern Thrifts and Thrift Smarts of Middle Tennessee.
Simply because I can find Ferragamo flats for $3.99 as opposed to $399
Posted by loveroffashion at 10:43 AM

I will make sure to keep a healthy distance from you the next time I see you at Goodwill.